An art historian museologist as visitor at

“If all the ways I have been along
were marked on a map and joined up
with a line, it might represent a Minotaur.“ 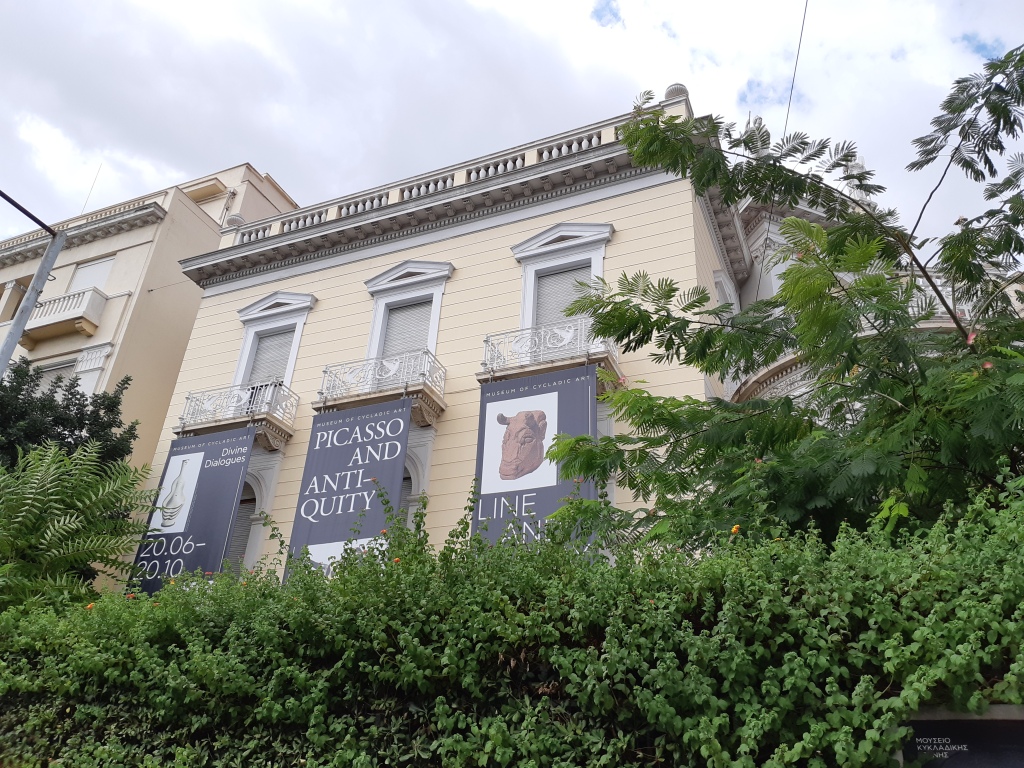 The archaic influences in the art history are one of the basic themes of my research. I was so happy that I could see the exhibition “Prehistory, a Modern Enigma” at the Center Pompidou in Paris on 30 May 2019. This theme continues in Athens. The Museum of Cycladic Art is organizing a rare and original exhibition entitled Picasso and Antiquity. I visited this exhibition on 13 September 2019. I took some photos at exhibition. Come with me and see my photos and read the text of curators of this interesting exhibition. 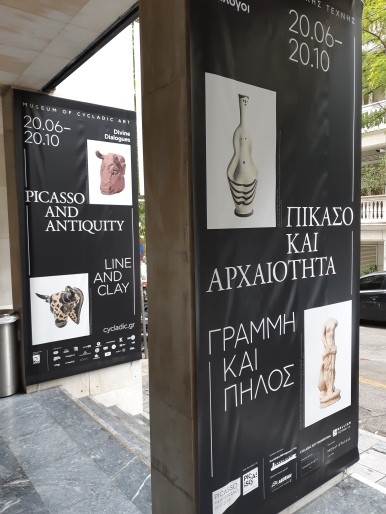 Line and Clay where ceramics and drawings by Picasso interact with ancient artefacts, as part of its Divine Dialogues exhibition series. Curated by Professor Nikolaos C. Stampolidis, Director of the Museum of Cycladic Art, and art historian Olivier Berggruen, the exhibition will last from 20 June to 20 October 2019. 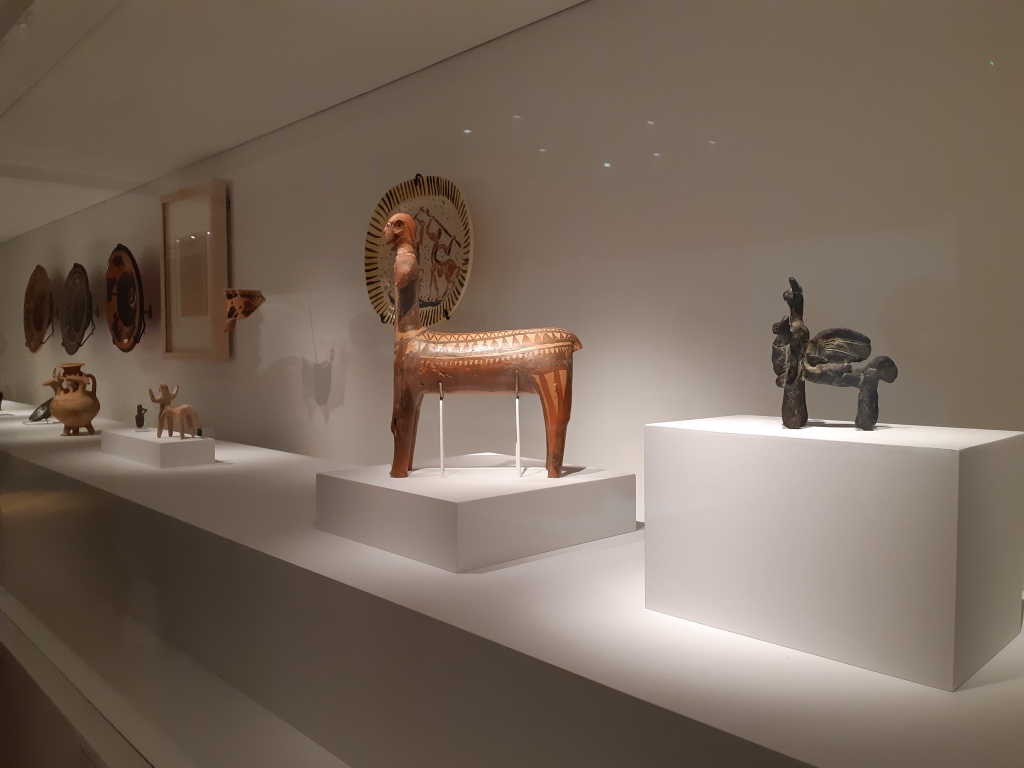 The antiquities come from 15 Greek museums and collections, namely the National Archaeological Museum, the Archaeological Museums of the Ancient Agora, Agios Nikolaos, Chania, Chora (Messenia), Delos, Eretria, Herakleion, Marathon, Paros, Patras, Thebes, the Museum of Cycladic Art, the Alpha Bank Numismatic Collection and the Cyprus Museum. They include sculptures, ceramics and bronze artefacts dating from Prehistory (from c. 3200 BC) to the Late Roman period (to the mid-third century AD)

Pablo Picasso | Silenus in the company of dancers, Cannes, 1933

Among the most interesting “pairs” presented in this exhibition are: the white clay Centaur with incised and slip-painted decoration, which Picasso created at Vallauris on 3 January 1953, conversing here with the unique tenth-century BC Proto-Geometric Centaur figurine from Lefkandi in Euboea and a sixth-century BC Cypro-Archaic Centaur. Or Picasso’s Blind Minotaur Guided by a Little Girl by the Sea (Boisgeloup, 22 September 1934), paired with the Κilling of the Minotaur by Theseus on a Late Classical Red Figure calyx krater (340–330 BC) from the National Archaeological Museum or the Torso of a Minotaur statue, a Roman copy of an Early Classical prototype. 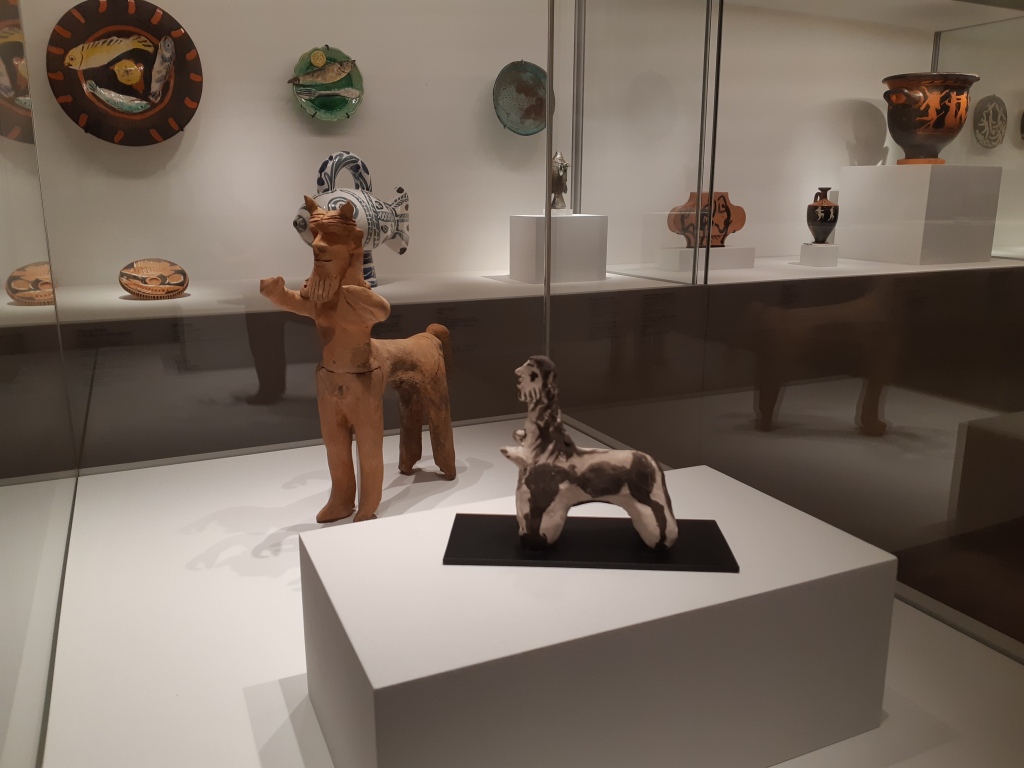 Unlike his unique paintings, the great twentieth-century artist’s drawings and ceramics are little known to the wider public. These are closely related to antiquity, inspired by the Creto-Mycenaean, Greek, and ancient Mediterranean civilizations in general. This exhibition reveals a world the artist carried within himself. It showcases antiquities that he might have seen in the ancient lands of the Mediterranean, but also in European museums, in the books he read, or during his encounters with Christian Zervos and Jean Cocteau. 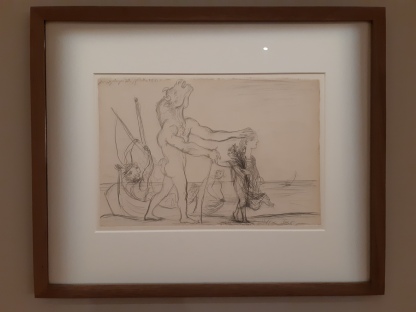 Throughout his long and productive career, Picasso consulted a wide variety of sources, adapting and transforming them relentlessly. The Classical tradition provided the Spanish master with a vocabulary of endless possibilities to be manipulated and modified. Prominent among these sources was ancient Greece, for it created an enduring mythology as well as a fertile iconography. From the time he copied antique plaster casts in his youth, Picasso was seduced by many themes derived from Greek mythology, drawn by their amplification of the mundane or their persistent aspiration to highlight humanity’s conflicting impulses. The Minotaur, for example, this Dionysian creature, half-beast, half-human, symbolized the dark regions of the psyche, becoming a telling symbol of the irrational forces of war. 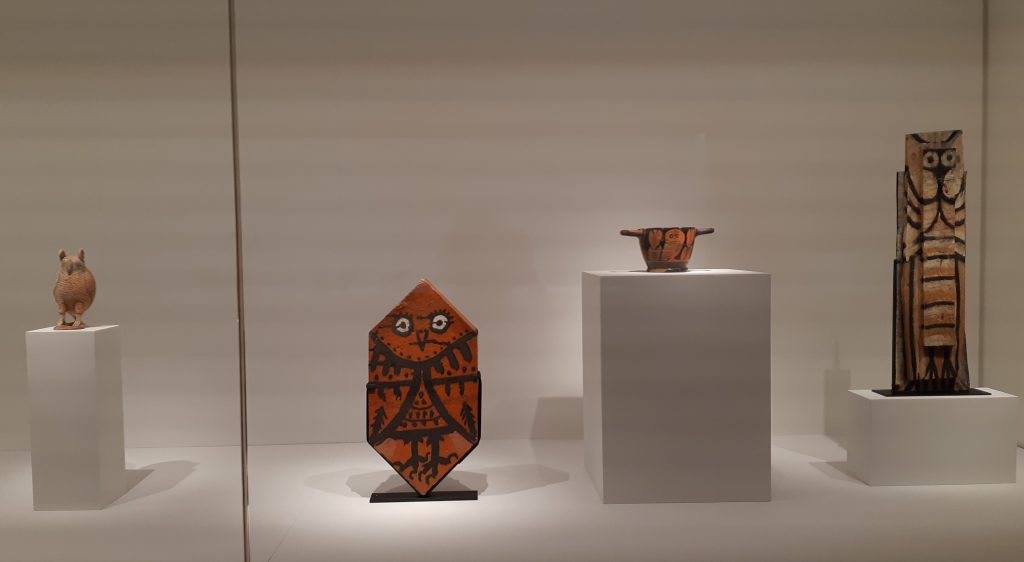 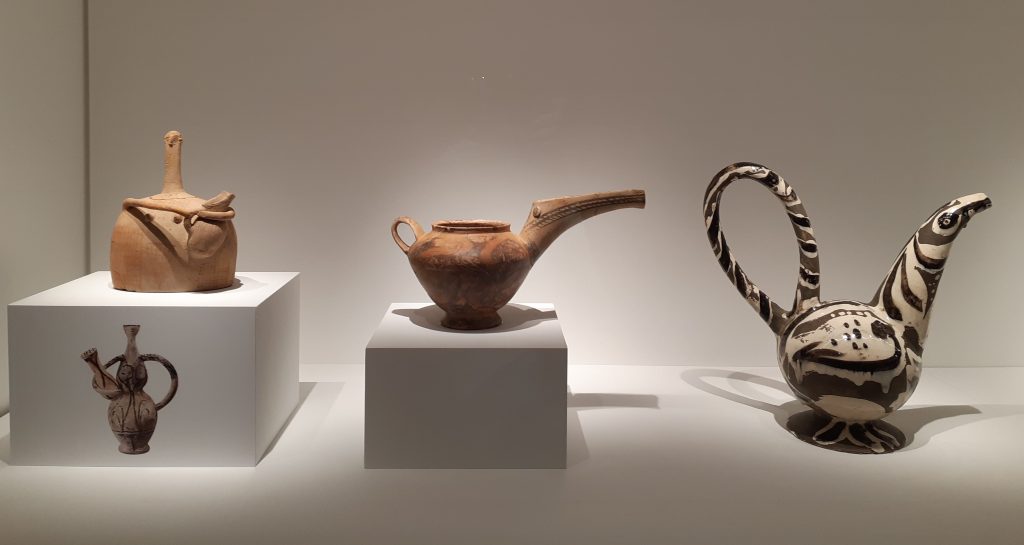 Clay ‘teapot’, Vasiliki, ca. 2400-2200 BC – Pablo Picasso | Bird, Vallauris, 1947-1948
Another, more benign vision of Greece emerged as well, one in which the ancient themes and stories lead to an idealized vision, a timeless Arcadia, which Picasso developed in sculptures and ceramics after the war. Yet, these works, unlike some earlier ones, are devoid of weighty associations with Greek myth. Rather, Picasso invented a fictitious or imagined antiquity. In the small village of Vallauris in the late 1940s and 1950s, he developed an extraordinary body of ceramics, objects that give us a vague idea of a mythical past, imbued with timeless and relevant imagery in the form of fauns, birds, musicians, etc. 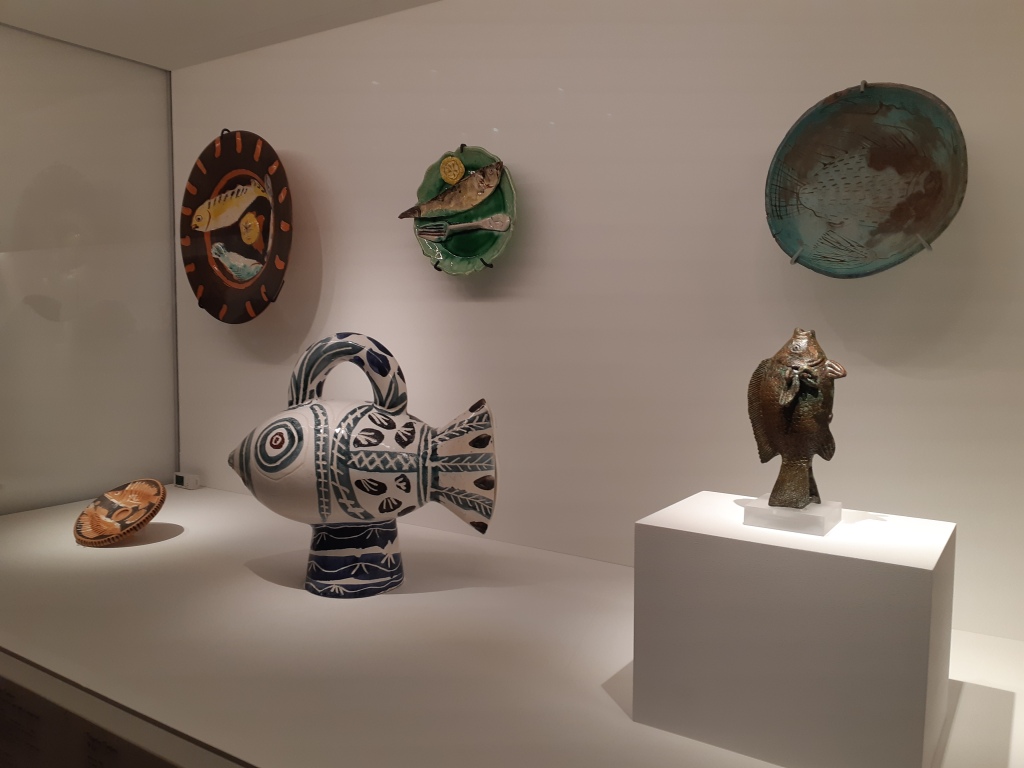 Fragment of a marble grave stele with a grooting scene, 4th century BC – Pablo Picasso’s work

The element that binds both ceramics, old and new, and Picasso’s illustrations derived from the antique (the Three Graces or Aristophanes’s Lysistrata) has to do with form and design, and not just iconography. Of particular relevance is the line, whether in drawings from the 1920s and 1930s or the lines traced on ceramics and reminiscent of Attic Red Figure vases, for example. «Picasso and Antiquity. Line and Clay» exhibition demonstrates the force of Picasso’s imaginary, yet strongly felt Antiquity and the lasting spell that objects from the past cast on us. 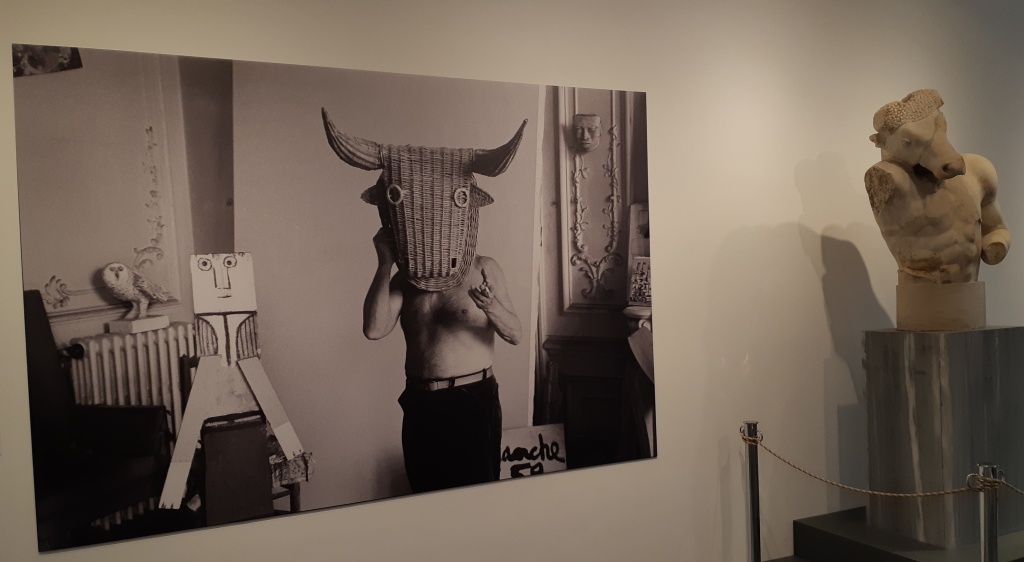 Text from the website of Museum of Cycladic Art.

The Nature of ARP